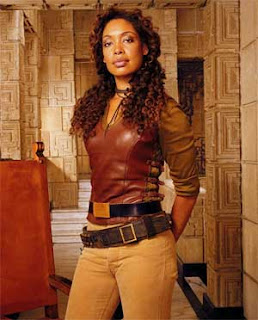 Gina Torres (born April 25, 1969 in Manhattan, New York) is an American actress of Afro-Cuban heritage. Her earliest TV role was a guest spot on Law & Order in 1992, but her first major role was as Queen Cleopatra in Xena: Warrior Princess. She later had a major role in Cleopatra 2525, though not as Cleopatra.

Torres gained further recognition when she played Nathan Fillion's gunslinging lieutenant Zoe in the short-lived Joss Whedon Space Western Firefly, a role she played once more in the spinoff movie Serenity. She has since appeared in Angel, The Shield, Boston Legal, Gossip Girl, and other hit TV shows. She has also performed many voice roles, including Superwoman, Wonder Woman, Vixen, and Airachnid. Torres married Laurence Fishburne in 2002, welcomed a daughter named Delilah in 2007, and separated in 2017.