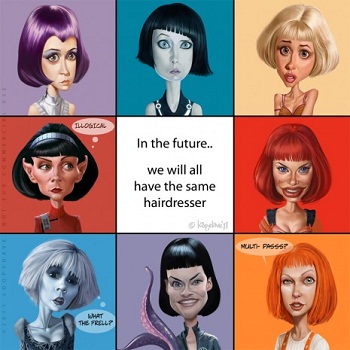 There's something about the clean lines of a bob, particularly with bangs, that suggests a sci-fi setting. Despite the style dating back to the 1920s (and being the defining hairstyle of the timeframe), they tend to be more of a '60s feel with the geometric trim popularized by the hairstylist Vidal Sassoon, and they are still seen as a little bit rebellious and progressive. After all, Long Hair Is Feminine, so short styles can be shorthand for a more gender-equal society. Additionally, the simple, straight lines fit in well with an Ascetic Aesthetic, marking the character as belonging to that timeframe. Not to mention, short hair tends to cause fewer problems with zero-g, helmets, and space suits.

Unlike its Sister Trope the '20s Bob Haircut, Sci-Fi Bobs are almost always mathematically straight edges and hair without curls. Fashionable Asymmetry is also common, one side of the bob being longer than the other.