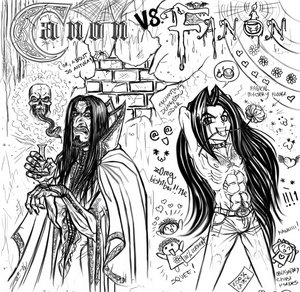 Note the similarity in fanon Snape's hairstyle to Sephiroth's. You should probably be taking notes; this might be on a quiz later.
"Would you draw me with your pencils and your pens
Make me much prettier than I really am?"
— Say Hi To Your Mom, "Dimensions and Verticals"
Advertisement:

So you've got this series. Maybe it's a TV show. Maybe it's a movie or video game. It got pretty good reviews, or maybe it didn't. It's now built up a fanbase. Folks are writing fanfics, drawing fanart, and spreading the joy over the Internet. So far so good, right?

Well, there's one thing. The series as it originally stood was sort of... missing something.

Where is the Fanservice?

Maybe it was directed mostly at the opposite gender from some of its fans. Maybe the art style didn't really have enough Generic Cuteness. Maybe the primary audience was children, so out of a few isolated instances, making attractive characters wasn't really the primary goal of the series. Or maybe the original was a book, so the appearances of the characters were mostly left up to the reader's imaginations. Whatever the case, the series finds itself without a Mr or Ms. Fanservice or other object of fan lust.

However, this state won't necessarily last long. One (or more) of the characters is going to end up transformed into the unofficial fandom sex object (or at least made far more attractive in fanart). If they were originally ugly, they'll be made achingly beautiful in fanart. If they were originally cartoony and flat, expect them to pick up curves. They may become the target of shipping. The fans have decided to instigate Self-Fanservice.

The targets of this can vary: in a cast without many characters, this can happen to one of the primary male/female characters simply because they're there. It can happen to villains, because Evil Is Sexy. And if your cast has a good woobie, the angst factor may draw fans in.

To a casual member or newcomer to a fandom, this can seem strange, seeing an ordinarily unattractive (in a bland way) character suddenly drawn in shirtless poses with a seductive look.

May lead to or be caused by an Ensemble Dark Horse or a Draco in Leather Pants. A leading cause of the childhood-scarring properties of Rule 34. Compare Perverse Sexual Lust. When it's an adaptation that ups a plain character's sexiness, it's Adaptational Attractiveness (which, incidentally, can be a catalyst for this trope). Despite the name, not related to being Distracted by My Own Sexy. Nor to be confused for when someone includes anything in the original work as a form of fanservice for himself, sexy or otherwise, either to him personally or considered such in general; that's Author Appeal.