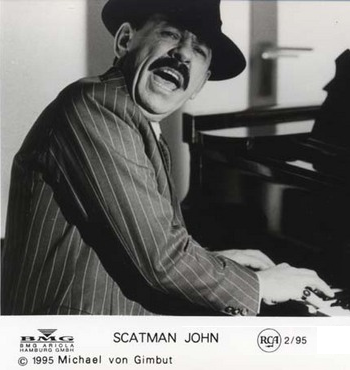 "Where's the Scatman? I'm the Scatman."
"I hope that the kids, while they sing along to my songs or dance to it, feel that life is not that bad at all. Even for just a minute."
— "Scatman" John Larkin
Advertisement:

Scatman John (real name: John Paul Larkin, March 13, 1942 – December 3, 1999) was a singer and jazz/pop pianist, famous for singing despite having a Speech Impediment which made him stutter. As it turned out, that stutter translated into a truly impressive talent for Scatting, and in an improbable crossover (for the mid-1990s, that is), he applied that scatting ability not to his traditional jazz music which he devoted much of his life to, but to Europop/Eurodance music. Although born and raised in California, he was much more popular in Europe and Japan than he ever was in the United States. He is best known for the somewhat self-titled song "Scatman (Ski-Ba-Bop-Ba-Dop-Bop)".

Before he came up with the Scatman persona, John Larkin was an accomplished jazz pianist, having even released a Self-Titled Album under his own name. It was a rough road getting to a music career, as Larkin had a speech impediment — a severe stutter, as mentioned earlier, one that he'd have for his whole life — that got him bullied through his childhood, and made him too embarrassed to try his hand at singing for much of his career. He still had a great passion for jazz and loved performing it, and Larkin went so far as to call music "a salvation" for him. He began primarily as a piano player, because he felt it gave him something to hide behind on stage, and he was immensely talented at it, which got his career some traction. Things changed during one fateful gig on a cruise ship, where he got up the courage to try some scatting during a performance. He got a standing ovation for it.

In the 1990s, Larkin and his wife had moved to Berlin, since jazz had a bit more popularity there than in America (by this point, in the Western world, even Kenny G was uncool). On a whim, his agent suggested Larkin try to combining his singing with modern Eurodance music and hip hop effects, which was all the rage at the time. Larkin, who'd been struggling for years to make a name for himself, was skeptical, as pop music like this was a young person's game. He decided to give it a try, but was nervous about his stutter putting off his potential audience. His wife told him to just make it part of his music, and thus, the Scatman was born.

Larkin went on to be considered a very inspiring example of how someone with a disability can turn his life around. He turned his stutter into an advantage in his music, as scat singing has a lot of repetition in it. He even points this out in his debut song, "Scatman" itself:

Advertisement:
Everybody stutters one way or the other
So check out my message to you.
As a matter of fact, don't let nothin' hold you back.
If the Scatman can do it, so can you.
Everybody's sayin' that the Scatman stutters
But doesn't ever stutter when he sings.
But what you don't know I'm gonna tell you right now
That the stutter and the scat is the same thing.
Yo, I'm the Scatman.

The Scatman's titular song was an international sensation, even if his home country of America only got it to #10 on the Billboard Hot Dance Club chart, and #60 on the Hot 100. His debut album, Scatman's World, got some impressive success from international audiences. He once claimed that he could barely start a performance in Spain, because people just wouldn't stop screaming for him. And then there's his spectacular success in Japan, where he became an icon, got his face on all types of merchandise, and Scatman's World sold 1.5 million copies.

Scatman John persisted with two further albums, Everybody Jam! and Take Your Time. These didn't quite take off to the same degree as Scatman's World, even to some countries where he'd previously sold like hot cakes. No music videos were made for the latter album, as it turned out John Larkin's health was beginning to deteriorate. In fact, midway through 1999, during a concert in Cleveland, he collapsed on stage mid-performance and was rushed to the hospital. John Larkin already knew what was wrong — he'd been diagnosed with lung cancer, and continued to record and perform despite this.

Following this mishap, he returned to his home in Los Angeles. Months later, John Larkin passed away from lung cancer on December 3, 1999, surrounded by family members. He was 57 years old. Worthy of note is one of his last public statements he made before his passing:

"Whatever God wants is fine by me ... I've had the very best life. I have tasted beauty."

One posthumous album was later released in 2001, titled Listen To The Scatman, where the Scatman gets back in touch with his roots. It's a traditional jazz album, filled with old standards and John Larkin playing the piano once more.

Eurodance, when you get right down to it, wasn't necessarily a style of music that made for long careers (hello, Rednex!), but the Scatman has definitely not been forgotten. He still has considerable respect from the disability community, and his story continues to inspire people from all over the world. To the surprise of many, Lou Bega (yes, the "Mambo No. 5" guy) released a song in mid-2019 called "Scatman & Hatman"

A further look into his work, and life, can be found at That Other Wiki

Scatman John and his work provide examples of:

I want to thank you all for joining,
in celebration of the world of Scatland...
Good night.