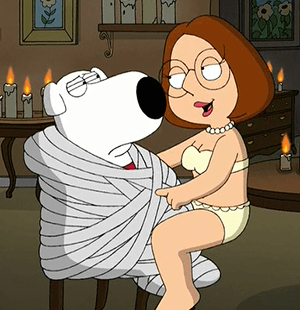 Dog + Human Girl = Yuck!
"Are you… Are you coming on to me?! Sweet Lord, I don't even have the words for how repugnantly wrong that is!"
— Courier Six's brain, Fallout: New Vegas: Old World Blues
Advertisement:

Subtext can be all kinds of fun. It can hint that those Heterosexual Life-Partners might not be so Hetero. Or those Bitter Enemies might not hate each other after all. Or, even if they do legitimately hate each other, there may be hints that the hatred in question isn't exactly platonic. Unfortunately, sometimes subtext can be used for a very different effect.

That's No Yay. Implied sexual tension, intentional or otherwise, between two (or more) characters to make the average fan reach for the Brain Bleach, for reasons such as Pedophilic overtones, incest, Unequal Pairings, or Sexual Harassment and Rape Tropes. If one half of the pairing is a Memetic Molester, this is likely to occur. Essentially, the shipping version of Fan Disservice.

Remember to note that an implied relationship between two consenting adults is not No Yay, and the presence of another element is required. When adding examples, please be sure to explain why that potential ship is a No Yay and what separates it from just regular Ho Yay or Foe Yay Shipping. Of course, one person's Squick is another person's Fetish, and this is a highly subjective trope. And if you're just here to complain about a pairing you don't like, please keep it off the main page.

See also Squick, Fan Disservice, Not What It Looks Like, Nightmare Fuel, Brain Bleach, Sick and Wrong, "No. Just... No" Reaction, and This Is Wrong on So Many Levels!. Also tends to crop up when I Have You Now, My Pretty and its sister tropes get played horrifyingly straight.