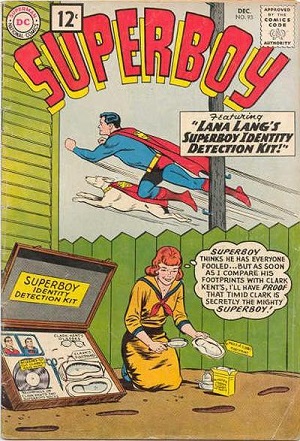 Lana Lang is Clark Kent's high school love interest and one of the most prominent supporting characters in the Superman mythos. She was originally created as a teenage Captain Ersatz of Lois Lane to complicate things for Superboy the way her older counterpart complicated the life of the adult Superman.

Lana was first introduced in Superboy #10 (September/October 1950). As Clark's next door neighbour in Smallville she was mostly depicted as equal parts close friend and nuisance, being determined to prove Clark and Superboy were one in the same. In keeping with the tradition set by Lois she was attracted to Superboy but had little time for the timid Clark (romantically anyway.) During the Silver Age Lana would prove nearly as much a Weirdness Magnet as Jimmy Olsen himself, going through many transformations and gaining or losing powers as the plot demanded. After gaining a "bio-genetic" ring from an alien she even had a few adventures as a superheroine using the name "Insect Queen" and ended up a reserve member of the Legion of Super-Heroes.

Meanwhile Lana had started to appear as an adult in Superman's Girlfriend, Lois Lane (while still appearing as a teenager in Superboy stories). Many Superman tales of the 60s dealt with the Lois/Superman/Lana triangle. Later, in the 70s and 80s she was Clark's co-anchor on WGBS-TV's evening news.

Lana was substantially reinvented for Superman III, her first major role outside the comics, which emphasised her Girl Next Door aspects and her friendship (and romantic interest) with Clark rather than his alter-ego.

Post-Crisis, with Clark's time as Superboy retconned away, Lana's role was altered into being Clark's Unlucky Childhood Friend and Secret Keeper, largely keeping her characterisation from Superman III. She appeared occasionally in the Superman stories and had a rocky few years, marrying and then divorcing fellow Smallville native Pete Ross and never quite getting over Clark. Later on she returned to prominence as a surrogate mother/big sister figure to Supergirl.

In the New 52, she was re-imagined as an engineer, and became a major supporting character in Action Comics and Superman/Wonder Woman, establishing a long-term relationship with John Henry Irons. Her role as one of the very few people who Superman has confided his real identity in remains secure.

In Superwoman #1, it's revealed that when the New 52 Superman died in Superman: Super League, the blast gave both Lois and Lana superpowers, Lois getting Superman's classic powers, Lana getting the energy powers of Superman Red and Blue. Lois convinced Lana to become Superwoman alongside her — only for Lois to apparently die at the end of the issue, leaving Lana as the series' main character.

Lana's silhouette is prominently show behind a curtain in a gratuitous shower scene.

Lana's silhouette is prominently show behind a curtain in a gratuitous shower scene.