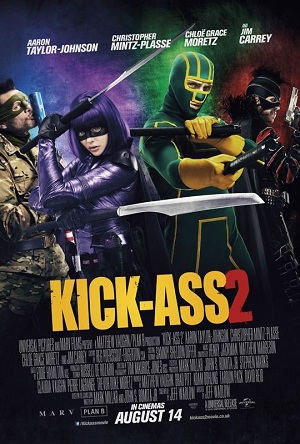 The 2013 sequel to Kick-Ass, the sequel adapts the second volume of the comic book and the Hit-Girl interquel.

It's three years after Dave Lizewski (Aaron Johnson) hung up his tights as Kick-Ass, and 15-year old Mindy McCready (Chloë Grace Moretz) is starting highschool at Dave's school...in theory. In reality, whilst Mindy's guardian is trying to give her a normal life, she's skipping school every day to train and fight criminals as Hit-Girl. Dave, bored with his life after retiring from superheroics, begs her to take him on as a sidekick. After Dave gets back in the tights, he soon learns that he and Hit-Girl are no longer the only costumed vigilantes in New York, and joins Justice Forever, a group of like-minded individuals led by Colonel Stars-and-Stripes (Jim Carrey).

Meanwhile, Chris D'Amico (Christopher Mintz-Plasse) is still seeking revenge on Kick-Ass for the death of his father, and suddenly finds himself in a position to do something about it.

While the majority of the cast returns, Jeff Wadlow replaces Matthew Vaughn and Jane Goldman as director and writer, whilst Vaughn remains co-producer. The film opened in August 2013.