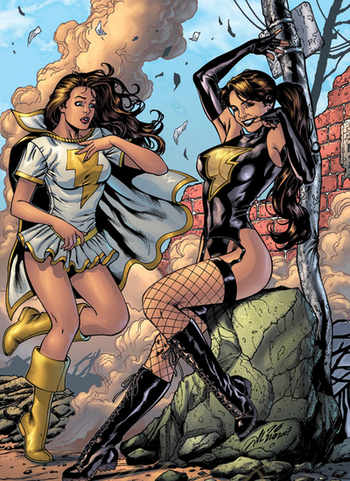 A white Minidress of Power to black with garters and fishnets. This has to be evil!
Wonder Girl: You're not a villain.
Arrowette: I am. And it's gonna stink. I'm not going to get to win anymore. All my friends will hate me. Oh God... I'll have to get a tight, skimpy black leather outfit that shows off my cleavage. Oh God... I'll have to get cleavage.
— Young Justice
Advertisement:

The most dramatic way to show that the protagonist has gone to The Dark Side is to give them a new costume. This outfit's coolness is sometimes inversely proportional to the coolness of the original, but is just as often much cooler, more flattering, and (for females) sexier as it bares more skin and curves, with a new hairdo and costume colors to complete their Evil Makeover and look. A character who returns to the side of good usually ditches the entire costume.

Sometimes, a character will split into a Good Twin and an Evil Twin, with the latter wearing one of these costumes. If so, the Good Twin will often wear a more "good" version of the costume, with lots of white and, usually, gold. And, of course, if the character already wears dark colors, the switch is often to a creepy, funeral/ghost style of white.

This trope is arguably most prevalent among Superheroes, where outfits are iconic.

Why does this costume almost always look better than the hero's original? Why, that's because Evil Is Cool and/or sexy (either that, or because it was designed second).

If the newly evil look is entirely spontaneous, requiring no shopping of new clothes for the character, then it is the sub-trope Paint It Black.

A Sub-Trope of Significant Wardrobe Shift. Compare Adaptive Armor. Contrast Good Costume Switch. Not to be confused with an Evil Twin dressing as his/her good twin.

The Queen of Mean

The Queen of Mean