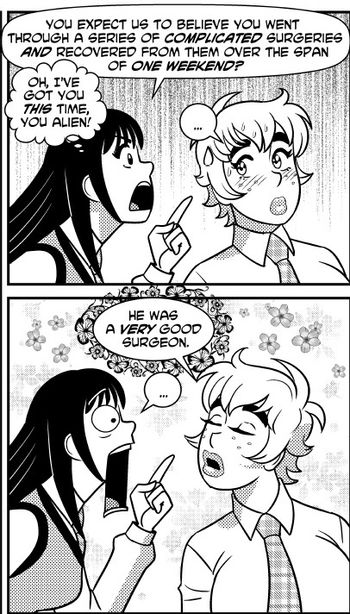 In Real Life, gender transition for a transgender person is a lengthy process involving extensive hormone and psychological therapy. For example, in the United Kingdom, most doctors will not administer hormone therapy without a recommendation from a psychologist, who must first spend months evaluating the patient to make sure that they are mentally stable and won't have any regrets.note Some opt to skip on the psych evals by going straight to other countries, like Thailand, which has many surgeons specializing in transition surgery - but this still involves hormonal therapy. Getting genital surgery requires at least a year of being on hormones and of living full-time as that gender. Additionally, the physical changes brought about by hormones take several years to complete, as with puberty.

Surgeries are not necessarily the be-all-and-end-all aspect of transitioning, either. Not all trans people get them – plenty are happy with the results of hormones and/or social transitioning. Those who do undergo cosmetic procedures (such as facial or genital reconstruction) do not do them all at once, and they must recover from the procedures.

Trans folks must also deal with other problems both before and during their transitions. They might lose some friends, family members, or partners after coming out. The results of transition are diverse, and the common saying is "your mileage may vary." Just like puberty, hormone therapy can yield vastly different results for different people, and some may be unsatisfactory.

Examples of this trope disregard all or most of the above. Not only is the Easy Sex Change much faster, but the physical, psychological, and social complications are also minimized. The physical transformation is usually highly effective and sometimes accompanied by Magic Plastic Surgery (particularly when the role is played by different actors pre-op and post-op).

Attractive Bent-Gender is a common result. Not that this can't happen in Real Life (feminizing or masculinizing facial and body features are common, as stated earlier), but recipients of the Easy Sex Change almost always come out looking like a Hollywood starlet or supermodel.

Sex change surgery that is reversed is another common signifier of the Easy Sex Change. That being said, the "reversed sex change" is not completely unheard of in Real Life - see, e.g., the story of Iraqi millionaire

Often followed by Old Friend, New Gender. Not to be confused with Gender Bender, which involves sex changes that (usually) are even easier, and driven by magic or Applied Phlebotinum. This trope is more about idealized (occasionally highly idealized) versions of Real Life SRS.