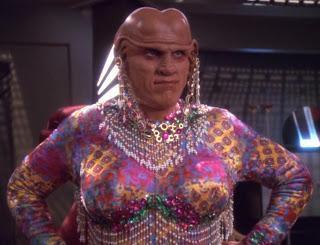 Butter Face doesn't even begin to cover this...
Advertisement:

After adding a new amendment that permits females to wear clothes, Zek is deposed as Nagus and replaced by Brunt. And he and Quark devise a plan to sway a powerful Ferengi businessman: Quark's mother, Ishka, will prove to him that females can be just as shrewd as males, and thus giving them equal rights will be good for the economy. Too bad Ishka has a heart attack while getting into a screaming argument with Quark, forcing them to find a new, very offensive plan involving Quark, a dress, and radical surgery.