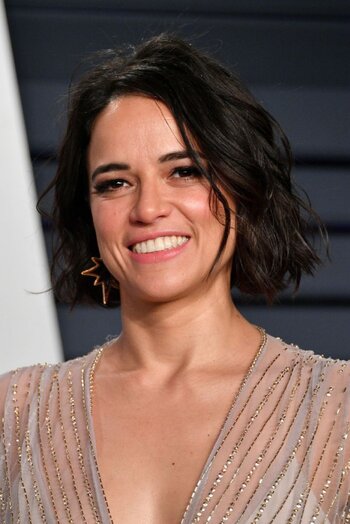 Mayte Michelle Rodriguez (born July 12, 1978) is a Latina American (mother Dominican, father Puerto Rican) actress, best known for playing badass characters (that are often in the army or a police officer) in movies such as The Fast and the Furious, Resident Evil (2002), Avatar, and Machete. She also made a brief foray into television by playing—you guessed it—a badass cop character that dies in Lost. Tends to die in movies, but at least in a badass way.

She came out as bisexual in 2013 casually during an interview, and has supported LGBT+ causes, though she's unwilling to discuss her personal life further, disliking that the news media focus on her sexuality. In 2014 she was spotted widely along with Cara Delevingne. This included photos taken of them kissing while in Mexico together. However, neither publicly commented on their relationship (outside tabloid claims), and it appears they broke up soon after since they were not seen together again subsequently.

Tropes commonly used in her roles