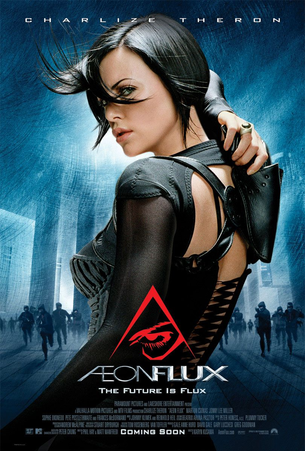 Æon Flux is a 2005 live-action film directed by Karyn Kusama and based loosely on the iconic animated series of the same name by Peter Chung. It starred Charlize Theron as the assassin Æon Flux, but otherwise was so far divorced from the original material that Peter Chung was embarrassed to have it associated with him.
Advertisement:

In the year 2011, a devastating virus wiped out 99% of the world's population. The remaining survivors live in the idyllic city of Bregna, but like all post-apocalyptic utopias, everything is not as it seems. Æon Flux is a member of a rebel group known as the Monicans who seek to undermine the government (or something), but when her sister Una is taken on suspicion of also being a Monican (she's not) and Æon is sent to kill the government's leader, Trevor Goodchild, she ends up uncovering secrets about Bregna that pretty much throw her ideas about herself and her world down the stairs.