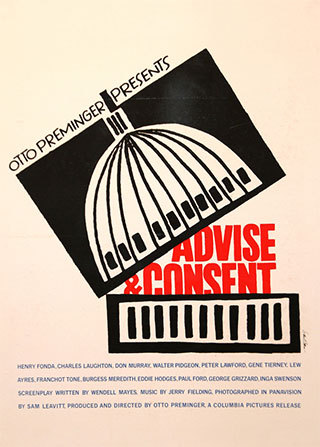 The President makes a controversial nomination for Secretary of State, one Robert Leffingwell (Fonda), a man who advocates a more conciliatory approach to the Soviet Union with the hope of thawing the Cold War. Political machinations ensue to get the U.S. Senate to "advise and consent" to the nomination.

The novel is not a Roman à Clef, but it does depict incidents and character traits that would have been familiar to Americans who followed politics at the time. Most obviously, a President who is hiding the extent of his illness and who serves with an honest but out-of-the-loop Vice President would have evoked Franklin D. Roosevelt and Harry Truman.

Notable as the last film appearance for Laughton, who plays Sen. Seab Cooley, the leader of the opposition to the President and to Leffingwell. And look for Betty White, who was not always old, in a small part as the Senate's lone female member.

Drury followed the novel with five sequels, but they were neither as popular nor acclaimed as the original, and subsequently were never made into films.