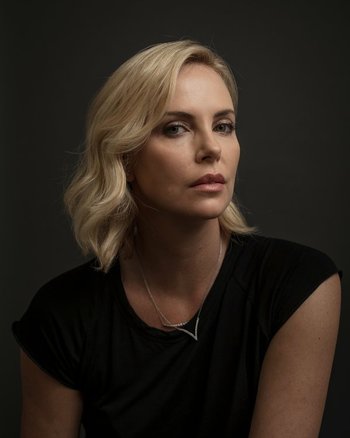 "Watching Charlize Theron fight has become one of the singular pleasures of contemporary American cinema, as close as we’re going to get to the endorphin rush of watching Gene Kelly dance, or Judy Garland sing, or Charlie Chaplin pantomime."
—The New York Times

Charlize Theron (born 7 August 1975) is a South African and American actor and producer.

After working as a model in her teens, she took a one-way trip to Los Angeles in 1998 with the hope of getting into films. She played a non-speaking victim role in Children of the Corn III: Urban Harvest but got attention as the ruthless girlfriend of James Spader in 2 Days in the Valley; this marked the beginning of her tendency to play characters who get physically punished.

After a string of major roles in not entirely unforgettable movies, she played serial killer Aileen Wuornos in Monster and got the Academy Award for Best Actress. Since then she's sought out complex and sometimes unsympathetic roles in quality pictures. She was highly praised for her work as the Jerkass protagonist of Young Adult, and the fandom went wild when she shaved her head and went Action Girl in Mad Max: Fury Road, in which she was the Supporting Protagonist. Since Mad Max she's carved out a solid career in action films, appearing as competent female badasses in Atomic Blonde, The Old Guard, and multiple installments of The Fast and the Furious.

She has been active in supporting many causes, including fighting HIV/AIDS and LGBT+ rights. Theron has also adopted two daughters, and one has come out as transgender, with her unequivocal public support.