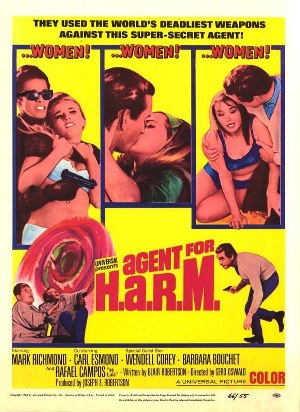 You know your lead is lame when the two women he scores with get more poster space than he does.
Advertisement:

Agent for H.A.R.M. is a 1966 American spy thriller directed by Gerd Oswald.

The plot concerns the development and distribution of a biological warfare compound referred to as "spore." Said spore turns humans into "living fungus" rather quickly and is apparently painless. Comrade Basil Malko (Martin Kosleck) is developing the spore to destroy the population of the United States by dusting the crops. The only man that can stop him is Dr. Jan Steffanic (Carl Esmond), a biologist who has recently defected from behind the Iron Curtain.

Shortly after Steffanic's arrival in the United States, his assistant is killed at his makeshift lab outside San Diego, so the eponymous H.A.R.M. sends one of its agents, Adam Chance (Mark Richman), to help protect the scientist. Unfortunately, there's various and sundry baddies led by the evil Malko, who would love nothing more than to turn Steffanic into guacamole.

The film was originally intended as a television pilot, but was inexplicably given a theatrical release instead. Even the director was surprised.

Agent for H.A.R.M. contains these tropes: