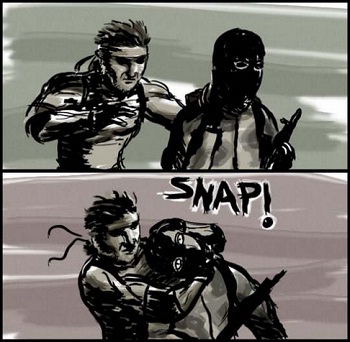 Next to "Off with His Head!", snapping a person's neck is one of the surest ways to kill someone in media.

Typical procedure: Alice stalks Bob. Catching him unaware, Alice grabs Bob's chin with one hand and his opposite temple with the other. Bob just has time enough for his eyes to go wide with the realization of how screwed he is when Alice wrenches his head to the side with a hideous cracking of bone. Bob is always killed instantly and usually with his eyes open. Sometimes Alice appears to put in an effort (or has superpowers or something) but often is remarkably blase about it. note A variant involves putting the victim in a front facelock and violently cranking upwards.

Note that in Real Life, it takes a considerable amount of strength and/or training to snap a person's neck,note Go ahead and (carefully) check your own neck - it takes considerable effort to turn your own head past its normal stopping point. The human spine is not to be trifled with! People who actually suffer broken necks tend to have had very hard trauma from falling or a car accident. especially if the character getting it snapped is considerably big and strong. Even though hangings, for example, were created as a humane way of killing people via a neck snap, if not done from a high enough place with a long enough rope to generate enough force, they will fail to do so, leading to death by Sinister Suffocation. It's possible if you can pin your opponent and know where to grab and twist to get leverage. In real life, spinal/neck manipulation is allowed in certain martial arts competitions such as the UFC and other MMA events. However, it looks very different than in the movies, and there is almost always time to "tap out" before injury, much less permanent or lethal injury. To perform the "neck snap" like in the page's image you would have to be super humanly strong.

Also note that in Real Life nothing dies instantly from a fractured neck unless it sends vertebrae fragments into, or contorts, the brain-stem in such a way as to shut down all lower brain functions. A broken neck is no guarantee of a "silent kill" either as, if the aforementioned brain-stem damage is not inflicted, all you are left with is a quadriplegic victim, severely injured but not dead, and still able to speak and scream. In addition, as mentioned above it takes a lot of strength to pull this off - fail to incapacitate the target, and you’ve given yourself away in a seriously vulnerable situation. Furthermore, if the spinal cord is not damaged at all, a cervical fracture can heal with proper treatment. This can lead to a lot of He's Just Hiding! sentiment toward characters who suffer such injuries.

The frequency of this in film and TV is possibly because it offers a fairly brutal way of killing someone without having to use or show any blood. It is also often used as storytelling shorthand for "this character is a Badass". Not to be confused with Neck Cracking.

As a Death Trope, expect spoilers.

Moloch turns his head around

Pump tells Moloch to spin his head around to prove to Skid he's possessing Dexter. When Moloch tries, he instead breaks Dexter's neck, killing them both.

Moloch turns his head around

Pump tells Moloch to spin his head around to prove to Skid he's possessing Dexter. When Moloch tries, he instead breaks Dexter's neck, killing them both.