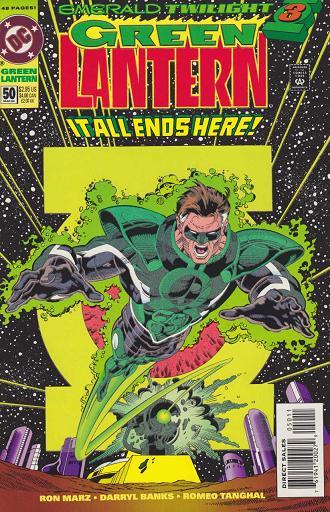 Hal Jordan will never be the same guy again.
Advertisement:

The year is 1994. Riding off the high of The Death of Superman and Knightfall, DC Comics was on a roll with creating Younger and Hipper heroes and Anti Hero Substitutes, but weren't happy that fans had (rightfully) caught on that the four pretender Supermen and Azbats weren't replacing the real Superman and Batman. So, they decided to really pull a fast one.

During the third act of Reign of the Supermen, Mongul and the Cyborg Superman eradicated Hal Jordan's hometown of Coast City. Hal, who was away in space at the time, would find the monstrous Engine City in its place, burst in, beat Mongul to a pulp and aided the returned Superman in shutting down the city and the Cyborg. But, it wasn't enough. Feeling empty, he used his Power Ring to recreate his hometown and everyone in it. The Guardians of the Universe, however, caught wind of this and sought to punish Hal for misusing his power. Going over the edge since the Guardians wouldn't even let him have a construction of his old life, Hal decided to seek out ultimate power, and his rampage would take the Green Lantern Corps with him.

This story saw the complete and utter demolishing of the Green Lantern Corps (it had been done previously after Crisis on Infinite Earths, but it didn't stick) and taking everything that was Hal Jordan's legacy with him as he was transformed into the villainous Parallax and saw it replaced with Kyle Rayner, who became last of the Green Lanterns. Guy Gardner, who had his own title at the time, was also affected as his own Green Lantern connections were severed and he was cast into the world of retcons. Hal Jordan would stay a villain, causing Zero Hour: Crisis in Time! but performing a Heroic Sacrifice in Final Night, bonding with The Spectre and ultimately returning to life and restoring the Corps with Green Lantern: Rebirth.