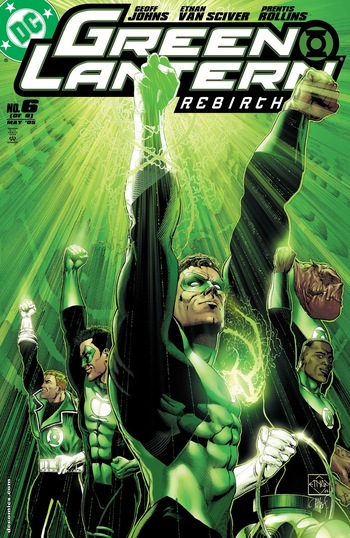 Hal... His reputation, his life, his very soul. It was all taken away.
— Green Arrow
Advertisement:

Written by Geoff Johns with art by Ethan Van Sciver (pencils, inks) and Prentis Rollins (inks), Green Lantern: Rebirth is the return to the franchise of Hal Jordan as main character. It depicts Jordan's struggle to free his soul from both The Spectre and Parallax with help from surviving members of the Green Lantern Corps, the opposition of Sinestro and the mistrust of the Justice League of America.

A limited six-issue series, Issue #1 was in stores by the end of 2004, with the sixth and final issue coming out around mid-2005.The story served as a prologue of sorts for the relaunch of the Green Lantern comic book in July 2005.

Although somewhat controversial because Jordan's return implied moving the then current Green Lantern protagonists to the background, the series proved wildly popular and was one of DC Comics' top sellers at the time it first hit the shelves, the first issue going through four reprints to keep up with demand. Green Lantern: Rebirth rivaled even regular cash cow Batman comics sales, something Green Lantern comics had not achieved in decades. Rebirth also opened the gates for a series of very successful Green Lantern sequel stories, mostly written by Johns that defined the franchise and even The DCU for the following decade.