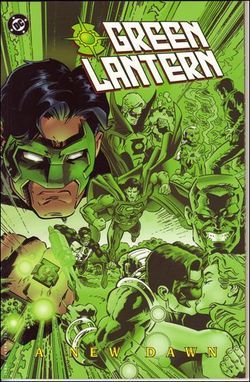 Green Lantern: A New Dawn are the first issues in 1994 of Kyle Rayner as the new Green Lantern.
Advertisement:

At the end of Emerald Twilight Ganthet gave the last power ring to a random guy coming out of a disco, Kyle Rayner. He tries it, and Shazam! Instant super hero suit! His girlfriend Alex explained to him that it was the suit of the Green Lantern, and he decides to become a super hero. He defeats OHM, a pathetic loser, just by the skin of his teeth. In his second fight he is attacked by Mongul, and defeats him with the help of Superman. But the government, who had discovered what had happened, sent Major Force to kill Rayner and get the ring. He kills Alex and stuffs her in the fridge, and got saved by Federal agents when Rayner was about to kill him. And then, Alan Scott shows up, to recruit him for Zero Hour.

A New Dawn contains examples of: