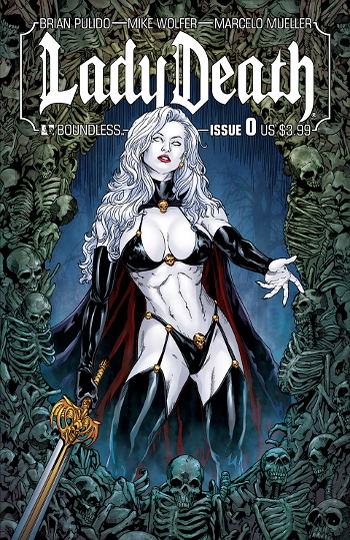 In 1991, the eponymous character of Evil Ernie (a comic written by Brian Pulido for Eternity Comics) encountered a beautiful, pale woman in his delusions. He fell in love with her, and she exhorted him to commit Megadeath, the extermination of every human on Earth, so they could be together. She was Lady Death.

In 1994, Pulido gave her her own title (or more accurately, several limited-series stories, with one flowing into the next) with his own imprint, Chaos! Comics. In this, hers was the epic story of a young woman in Sweden named Hope. Her mother died when she was young; her father, a warlord named Matthias, was callous and brutal, and even consorted with dark powers, which eventually provoked a rebellion from the people. When he escaped by summoning a demon, she was included in the mob's ire, and was burned at the stake. In desperation, she uttered an incantation she had heard him use, summoning a demon who offered her a bargain: serve the powers of Hell and renounce humanity, and he would spare her from death. She woke up in Hell, in the midst of a civil war between Lucifer himself and her own father. Corrupted by her surroundings, her skin, hair, and eyes turning white, Hope sought allies, at first finding only an exiled blacksmith—one of Hell's finest. In preparation, she set aside entirely her mortal name and self, and declared herself Lady Death, before leading a rebellion against the lords of hell. She rebelled, and defeated Lucifer by casting him through a gate to Heaven, assuming the throne of Hell as Queen of the Damned. Or did she...? In any case, as a last curse, Satan told her she would never be able to return to Earth as long as the living walked. She decided to circumvent this pronouncement, and declared she would exterminate every living thing on Earth if she had to.

In 2001, Chaos! Comics folded. Pulido lost the rights to all of his characters except Lady Death. Lady Death was picked up by CrossGen Comics, who took the character in a new direction. In Lady Death: A Medieval Tale, an ongoing series, which takes place entirely on Earth, humanity is at war with the Eldritch, who raid and pillage human cities bordering their lands. Though quick and powerful with magic, they are kept back by a relative lack of physical strength and their aversion to Christian iconography. During one raid, a noble (as in high-ranking) Eldritch finds himself intrigued by a human woman, who accepts him for a time. Nine months later, the woman gives birth to a girl, whom she names Hope. As she grows up, strange things happen around her, and one day in the market, a man notices her eyes briefly turn white, looking like those of an Eldritch. Asking her mother, Hope is told of her father. Before much more can be revealed to her, though, the townsfolk, riled up by the man who noticed Hope's eyes earlier, storm their house. Defending her mother, Hope is injured, but the wound heals instantly. Seeing this as proof of her evil, the townsfolk take them to the river and drown them. Soon after, Hope's father arrives, and tries to heal them, but is apparently unsuccessful...yet after he leaves, she is revived, and now her appearance matches that of her father's lineage—pale as death, with hair and eyes to match. Desiring revenge, she attacks the town, but they are too many for her. The intervention of a wandering warrior named Wolfram von Bach saves her, and they leave. After burying Hope's mother, Wolfram begins to teach her all he knows of Eldritch and swordplay alike, and warns her that sooner or later she must choose a side...

When Crossgen folded in 2004, Avatar Press picked up the license, and not only continued CrossGen's take with Medieval Lady Death, but also created a new series that returned the character to her roots. A young woman named Hope was the daughter of Mary and Marius. Marius was a crusader who had a tendency to return from battles without any of his peasant levies, only his most loyal soldiers surviving with him. Hope came to realize the evil that her father was doing, and along with her mother followed him to secret tunnels where they found him summoning dark wraiths, who refer to him as Sagos. Sagos is offering a sacrifice of masses of peasants in exchange for a domain in The Labyrinth, a dark world of the afterlife. When he spots them, Sagos, revealing himself as a being possessing Marius, steals Mary away through a portal, leaving Hope behind.

At this point, the peasant rebellion finally catches up, and when they find that Marius has escaped, settle for attempt to execute Hope for his crimes. She utters the incantation Sagos used, and the dark wraiths agree to let her through the portal if she pledges her soul to The Labyrinth. When she passes through, her skin, hair, and eyes become white, the mark of those who willingly go through, and she ends up in a waste called the Blacklands. There she meets a man named Wargoth, who after seeing the natural inclination she now possesses towards magic, agrees to help her in her travels. He also recruits a sorceress named Satasha to teach her, and trains her in battle himself, though every weapon she handles melting due to the uncontrolled magic she possesses slows this process considerably. Over two years, they find that Sagos's army is conquering the Blacklands and turning its denizens to undead, converting them to his cause. They finally track him down, but he is more than a match for all of them, and escapes, leaving them for dead. They survive, and Lady Death not only recovers a sword made for her that can withstand her touch and channel her power through it, but learns great mystic power... and that Sagos not only plans to conquer the Blacklands, not only plans to conquer Earth itself, but has the means to do it.

Relatively little had been done story-wise with the character by Avatar since 2007, though reprints of old stories and new Fanservice books had been published, and in late 2009, it was announced that Lady Death would be changing publishers again, this time to Boundless Comics, a publisher that in fact has been created by the founder of Avatar Press specifically to publish Lady Death (though they aren't against expanding in the future), with another reboot in 2010. In this take, a young thief in medieval Spain named Iladra is attacked by demonic warriors, and from there must find out why... only to learn that she was once the Queen of Hell, her powers, memories, and soul stripped way by a creature calling herself the Death Queen, whom Lady Death knows nothing of, but who seems to have a personal grudge against her. It turns out that it is not a reboot at all, but a continuation of the Avatar story, with the same characters... and that the Death Queen is Hope's mother. After this terrible revelation and gathering most of her powers, Lady Death reunites a rebellion against Death Queen's tyranny. After her victory, she travels to the Void, located at the distant corners of the Underrealm and makes a discovery about her true nature that will change her forever.

Due to issues with Boundless trying to eventually cut Pulido out of the process in working on Lady Death, and after various lawsuits by Pulido, the Avatar/Boundless version of Lady Death ended with the "Lady Death Apocalypse" series in 2015. The character rights were finally given back to Pulido, and the tales and adventures of Lady Death are now being continued with Pulido's new company, Coffin Comics. There was a Kickstarter campaign created, which resulted in the recently released Lady Death Chaos Rules, which sees the return of Lady Death descending back into the depths of Hell itself. While at this point the truth of her background remains a bit of a mystery, we find Lady Death being awakened with altered memories of her past, as these new publications are a follow-up to the Chaos! publication.

The new story sees the return of a few familiar faces from her original Chaos comics run, and of course a brand new sword, Chaos. There is a follow up that is currently in the works, Lady Death Damnation Game.

In the storyline, Lady Death, by edict of Pulido, could suffer setbacks and even defeat, but was not and would never be a victim. The medieval story has her dressed more believably, in black armor and clothing that covers her from the neck down, and was less explicitly violent, but still sold fairly well.

open/close all folders
The comics as a whole
Chaos Continuity
Cross Gen Continuity
Avatar Press Continuity
Waldorf: This is the first Death I've ever seen with an hourglass figure!
Statler: Y'know, at our age, jokin' about The Grim Reaper probably isn't a good idea...
Waldorf: Huh. Ya got a point there. Guess it's not that bright to tempt Death.
Statler: ...of course, I might not mind if it was her!
Both: Do-ho-ho-ho-hoh!
Coffin Comics Continuity
2004 Animated Movie