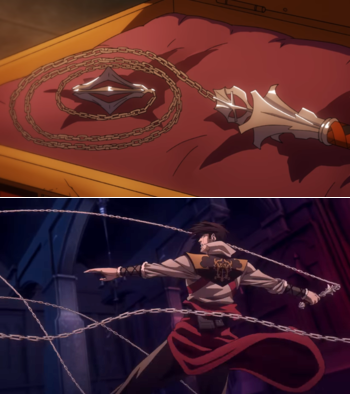 This whip's stretch factor is off the chain.
"We are all bound to the throne of the Supreme Being by a flexible chain which restrains without enslaving us."
— Joseph de Maistre
Advertisement:

Lots of characters use chains and whips, mostly because it's cool. However, these often have the pesky problem of having limited reach, and if they're long they'll be heavy and bulky to carry. So how do you keep the cool while downplaying these inconveniences? By using Variable Length Chains! They grow long to reach a target, short when being carried, and even disappear entirely depending on needs. A necessity for function of most Whip Swords.

Usually this is a stylistic effect that's never addressed. When it is, the extra length and weight of chains are usually said to be stored in Hammerspace, or the weapon is actually magical, empathic, or somehow alive and able to prestidigitate more links as needed.