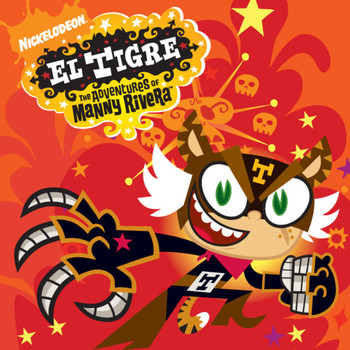 "Miracle City... a spicy cesspool of crime and villainy! This is the story of Manny Rivera, better known as El Tigre! Son of the legendary hero, White Pantera! Grandson of the evil supervillain, Puma Loco!"
— Opening Narration
Advertisement:

El Tigre: The Adventures of Manny Rivera (2007-2008) is an animated series on Nickelodeon created by a husband and wife team, Jorge Gutiérrez and Sandra Equihua. It is about a 13-year-old Mexican boy, Manny Rivera, who has a magical belt that turns him into costumed superhero El Tigre (Spanish for "The Tiger"* Or just "tiger"; Spanish is more liberal when it comes to definite articles than English).

Unsure of whether he's destined to be a hero like his father, White Pantera, or whether crime is his true calling, like his grandfather Puma Loco, Manny refuses to pick one side over the other. He alternately contributes to and opposes the seedy goings-on of his town, Miracle City (described in the opening sequence as "a spicy cesspool of crime and villainy") with the aid and companionship of his best friend, Frida Suarez.

Although Manny is mainly on the side of good to appeal to young viewers, he frequently disobeys his honest and heroic father and partakes in "bad" acts (e.g. buying the tattoo maker, kicking the crutch that kept Casa De Adios up and thus demolishing it).

Sadly, despite predominantly positive feedback (even winning several Annie and Emmy awards), the show only lasted 26 episodes before it was cancelled.

El Tigre: The Adventures of Manny Rivera provides examples of: