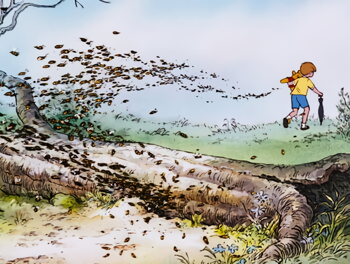 Pooh's not gonna have hunny for a very long time.
"Oh no, no, not the bees! NOT THE BEES!! AAAAAAAAARRRGH! OH, THEY'RE IN MY EYES! MY EYYYYYES! AAAAHHHHH! AAAAAGGHHH!"
— Edward Malus, The Wicker Man (2006)
Advertisement:

The worst fate in the universe is to face a Zerg Rush of stinging insects such as bees, wasps and hornets. Nothing so small should cause so much fear amongst creatures so much larger... and yet they do. The distinctive coloration. The horrible buzzing noise. The agony of stinging. The way they move in swarms. The kamikaze mentality. And their determination to chase you. Of course, if you're allergic or if there are a lot of the little bastards, they can put you in the hospital or even kill you.

Those using the trope often depict the insects as males and often use honeybees even though that kind dies after using its sting. The swarm will also share one mind and will often form shapes in the air like an arrow pointing to its target, or a weapon.

Often, the swarm is deliberately riled up by the one it attacks. A particularly common variant involves someone going after a beehive for its honey, only to be faced with a large swarm of very angry bees. Similarly, someone may mistake a wasp nest for a beehive, try to get honey from it, and only end up pursued by outraged wasps and without any honey to show for it. It's also possible for the nest to be knocked down or damaged by mistake, such as by someone climbing a tree or throwing balls, to the same result.

To escape the swarm, the character will often jump into a body of water. Since bees can't swim, they are usually forced to give up — which isn't advised in real life unless you have gills or the body of water is open and large enough for you to swim away underwater, since they'll wait. (Your best bet is to cover your exposed skin in mud.)

Subtropes include Bee-Bee Gun. If a monster or person is made of bees, then they're The Worm That Walks. Often seen in the Hornet Hole, or living in a Stock Beehive. Almost always overlaps with Bee Afraid, but may also overlap with Wicked Wasps, the bees' even meaner cousins. Sometimes overlaps with Bears Are Bad News because fictional bears like their honey, and may set these bees off when trying to get at the hive. See also The Swarm, which refers to anything tiny and dangerous that moves and attacks in large numbers, and Ant Assault, another troublesome members of Hymenoptera order. Contrast Virtuous Bees.