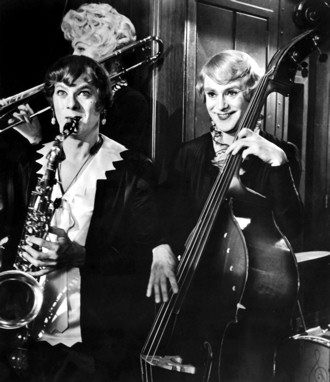 Yep, these are a couple of dudes.
"Sirrah, go you to Barthol'mew my page,
And see him dress'd in all suits like a lady;
That done, conduct him to the drunkard's chamber,
And call him 'madam,' do him obeisance."
— Lord, The Taming of the Shrew

Any scenario where a man dresses as a woman for purposes of disguise. In many cases, this results in Incredibly Conspicuous Drag, the man with his square jaw and broad shoulders looking like an Amazon at best or a guy in a kitschy Halloween costume at worst... but it's still good enough to fool others most of the time. He may look genuinely attractive as a woman, but Attractive Bent-Gender is likely to come into play in either case.

Frequently, but not invariably, Played for Laughs. May result in An Aesop about walking a mile in women's shoes.

Subtrope of Crossdresser. If the character wears female disguises more often than seems strictly necessary and/or seems to like it to some degree, then he also qualifies as a Wholesome Crossdresser or Creepy Crossdresser depending on just what fashion he or she likes it.

Sweet Polly Oliver is the Distaff Counterpart of this trope, but is more likely to be Played for Drama.

Harmless Lady Disguise is a subtrope, as is Hiding in a Hijab.

The Black Baron is revealed to be Penelope.

Alternative Title(s): Disguised As A Woman

The Black Baron is revealed to be Penelope.