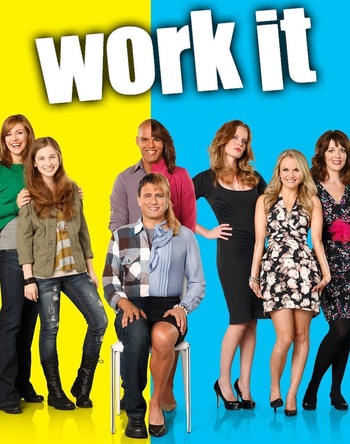 Work It is a six-episode ABC sitcom from 2012 about two St. Louis guys (Lee and Angel) forced to dress as women in order to get jobs as pharmaceutical sales representatives. The reason for this is twofold:

...Except Lee gets hired because (s)he knows the products and is a decent sales(wo)man. Yeah. And the "fun" doesn't stop there.

Work It was scheduled to air a "tryout" first season (as a midseason replacement for the similarly-themed critical flop Man Up!) from January 3–31, but was massively panned before and during its brief run. The Futon Critic took one look

and bashed it in pretty much every facet, while IGN awarded it its first "0" rating since 2005

and The A.V. Club gave it an "F" (Wikipedia has their comments and others here

). Audiences clearly didn't like it, either - ABC removed it from the schedule after two episodes

, but not before making excuses.

To say the show was a bomb from conception would inflict undue affront upon bomb makers.