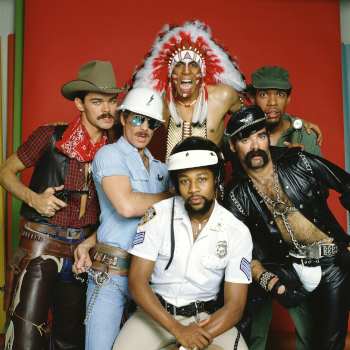 Johnny Cage: You just need a cop, a sailor and a cowboy.
Kotal Kahn: For what, Johnny Cage?
Johnny Cage: Only the greatest disco reboot ever.
— Mortal Kombat 11
Advertisement:

Village People are a concept disco group consisting of gay stereotypes formed in the late 1970s. The group is as well known for their on-stage costumes as for their catchy tunes and suggestive lyrics. Original members were: policeman (Victor Willis), American Indian chief (Felipe Rose), cowboy (Randy Jones), construction worker (David Hodo), leatherman (Glenn Hughes) and Military man (Alex Briley). For the release of "In the Navy", both Willis and Briley appeared temporarily as sailors. Originally created to target disco's primarily gay fan base by featuring stereotypical gay fantasy personas, the band's popularity quickly brought them into mainstream. The group is seen by some music critics as less serious for their camp style, appearance and musical choices.

Village People scored a number of disco and dance hits, including their trademark "Macho Man", "Go West", the classic club medley of "San Francisco (You've Got Me) / In Hollywood (Everybody is a Star)", "In the Navy", "Can't Stop the Music", "Sex Over the Phone" and their biggest hit, "Y.M.C.A.".

The group was created by Jacques Morali, who was a French musical composer. He had written a few songs when he heard Victor Willis singing background vocals in a studio. Morali approached Willis and told him, "I had a dream that you sang lead on my album and it went very, very big." Willis agreed to sing on the first album, Village People.

It was a success, so Morali and his business partner, Henri Belolo, (under the collaboration Can't Stop Productions), decided to build a real group around Willis for a stage act to showcase and perform their disco music creations. They took out an ad in a trade magazine band which read: "Macho Types Wanted: Must Have Moustache." The first recruit, Indian Felipe Rose, Morali literally bumped into on the streets of Greenwich Village. Rose was a bartender who wore jingle bells on his boots. He was invited along to take part in the sessions for the first album. Alex Briley (who eventually took on the soldierman persona) was a friend of Willis'. The other three, Mark Mussler (construction worker), Dave Forrest (cowboy) and Lee Mouton (leatherman), were quickly replaced, respectively, by Dave Hodo, Randy Jones and Glenn Hughes, who all had more experience as actors/singers/dancers. Leatherman Hughes had first been spotted as a toll collector at the Brooklyn Battery Tunnel. Early on, one of the group's songwriters, Peter Whitehead, even performed with the group for a brief time.

Despite the French songwriters, the songs lyrics were all in English as Morali and Belolo used American lyricists. On the first album, they brought in songwriting legends Phil Hurtt and the aforementioned Peter Whitehead. For the next three albums (and on other Can't Stop Productions such as Ritchie Family and Patrick Juvet) lead singer Willis was the lyricist.

Their original career was derailed by 1980's Can't Stop the Music, a musical comedy film directed by Nancy Walker. It is a pseudo-biography of the group which bears only a vague resemblance to the actual story of their formation. Newsweek described the movie like this: "Can't Stop the Music ushers in a whole new concept in entertainment — it's the first all-singing, all-dancing horror film; the Dawn of the Dead (1978) of the disco era." This movie, along with Xanadu, inspired John Wilson to create the Golden Raspberry Awards to honor the worst that Hollywood had to offer, and contributed to rendering the movie musical genre functionally dead for about twenty years.

Village People has examples of: