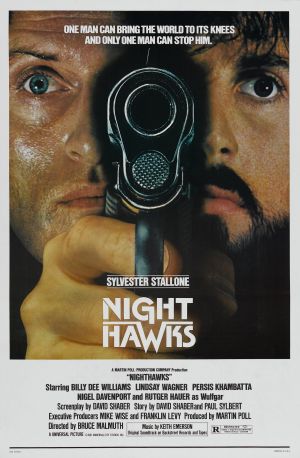 Which one is trying shoot us?
Advertisement:

Nighthawks is about a terrorist named Heymar Reinhardt (Hauer in a portrayal of a terrorist that's both refreshingly and chillingly realistic), who operates under the alias of Wulfgar. Stallone and Williams play two cops named Deke DaSilva and Mathew Fox, respectively. DaSilva and Fox, who operate undercover, have their cover blown when two other officers approach them and tell them, in broad daylight no less, that they have been chosen to be part of an anti-terrorist unit assembled by a British counter-terrorist specialist named Peter Hartman (Davenport). Hartman believes that Wulfgar is heading to New York, after his cover was blown by another terrorist who unintentionally gave his passport to the police, and he wants to stop him before it's too late. Unfortunately, Wulfgar is already in the states, and is staying with a flight attendant named Pam (Thompson).

One thing that is interesting to note is that this film was scored by Keith Emerson, who also scored Dario Argento’s Inferno (1980), and part of the score for Godzilla: Final Wars.

Not to be confused with that painting.