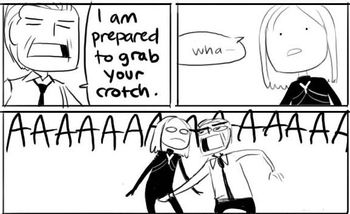 YOU ARE THE WORST PRESIDENT EVER
"Testiculos habet et bene pendentes." Translation He has testicles and they hang nicely.
— According to urban legend, what the College of Cardinals must inspect and affirm for all newly elected popes in order to avert another Pope Joan

Let's say you've got someone with an Ambiguous Gender on your hands. Either the Dude Looks Like a Lady or the Lady Looks Like a Dude. The mystery is driving you nuts, so what's the fastest way to figure it out?

Grab a handful of "the merchandise."

When it's done to one's own self after a Gender Bender, it's Man, I Feel Like a Woman. After an accident or near-miss or otherwise worrisome body alteration, it's Testes Test.

Compare to Crotch-Glance Sex Check, in which a character checks an animal's crotch to determine their sex, and Outfit-Rip Sex Check, which is a more extreme version where a character's clothes get ripped off.