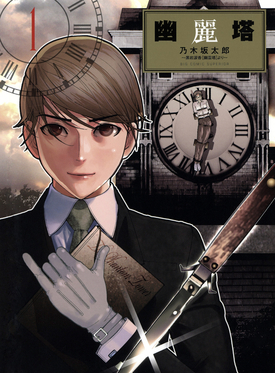 Yuureitou, or The Ghost Tower, is a seinen mystery-horror manga by Taro Nogizaka (of Team Medical Dragon fame). It ran from 2010 to 2014.

In 1952 a woman is killed by her adopted daughter by being tied onto a clock tower's hands until her back breaks.

Two years later, the clock tower is now known as the 'ghost tower' and is supposedly haunted. Amano Taichi, a NEET, is attacked by someone or something in the same clock tower, and almost dies in the same way as the woman but he is rescued by a mysterious man named Tetsuo.

Tetsuo is searching for a treasure that is connected with the ghost tower and asks Taichi to be his partner. Taichi's enticed by the idea of becoming extreme wealthy and is further convinced when his house mysteriously burns down. As it turns out, there's a Serial Killer out there that attacks people in the 'ghost tower'.