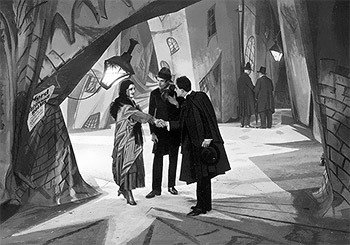 One way for authors to subtly (or overtly) convey and reinforce the mood of a scene, episode, or even the genre of the work is to make the environment symbolize it. Much like a character with an Astonishingly Appropriate Appearance, a setting can be made rife with symbolism to play up the emotional theme at work.

Generally, the whole setting itself will reflect the overall mood of the show, while a special location for a given scene will display the current mood of the characters.

This can include manipulation of the following:

Note that the setting itself will not actively or supernaturally change unless the characters change it. Whether it's urban renewal to uplift or massive battle damage and craters depends on what the author wants. "Natural" changes such as the lights going dead or a fire breaking out do count towards this trope, however.

Related tropes are Fisher King, Genius Loci, and basically everything in Settings.

open/close all folders
Anime & Manga
Comic Books
Fanfiction
Films — Animated
Films — Live-Action
Literature
Live-Action TV
Video Games
Web Comics
Truth In Television
"You're already bitter about getting crushed, and then you wake up and it's 9 degrees outside, the skies are gray and you have to scrape ice off your windshield as your ears slowly freeze. It's almost like a background for your mood".