Fanfic / Racer and the Geek 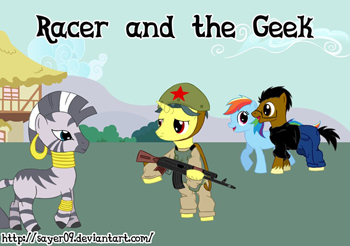 The racer, the geek, the zebra and the cameo.
Cover drawn

Racer and the Geek

is a romantic story written by Kalash93.

Sunny Breeze is a seemingly ordinary stallion who lives alone in Ponyville. He just goes to work and whiles away his days alone in his apartment. This all changes when Rainbow Dash suddenly shows up at his doorstep one night and demands that he go with her to the Spring Equinox festival. Things begin to snowball quickly. Hilarity Ensues. It quickly becomes apparent that not all is well with Sunny Breeze. Not everything is as it seems, however. There's more going on in Rainbow Dash's mind than Give Geeks a Chance. And even Sunny Breeze himself harbors dark secrets and Hidden Depths.

The story is currently ongoing. It typically updates once every two weeks. Between updates, the author often releases side stories.

The author worked as an editor on Rainbow in the Dark, and it's been revealed that it is possible that both stories exist in the same universe, although perhaps not in the same continuity. Small nods, links, and references are present. This is still completely nebulous.

Warning: Spoilers are present and unmarked.