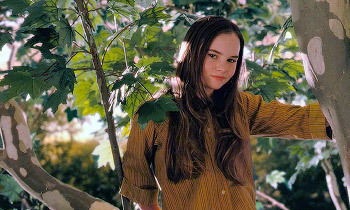 This Tomboy's boyishness makes her stand out. She'll be found spending time outside where she can climb trees and play in the dirt, with the possibility of the natural consequences, as opposed to Beauty Is Never Tarnished, because she's one of those girls who'd look cute all scuffed up.

She loves to go exploring, especially when it comes to heights, and often has imagination that can take her anywhere. There's a good chance that she can get a less adventurous boy to join her, or maybe a feminine girl. She's a natural kind of person, but in a dirtier way than a Granola Girl. If her rural activities take her a little further from home, she's one of the Free-Range Children.

Might likely overlap with Short Tank or Academic Athlete. May also overlap with Nature Lover, if she actually likes it rather than regards it just as place for exercise. She might be a Tomboy Princess. Related to One of the Boys who is a girl who prefers to socialize with male characters. Compare Passionate Sports Girl. Contrast Gamer Chick, a Tomboy who stays inside, playing video games.

Pocahontas jumps off a cliff.

Pocahontas is definitely an adventurous gal!

Pocahontas jumps off a cliff.

Pocahontas is definitely an adventurous gal!