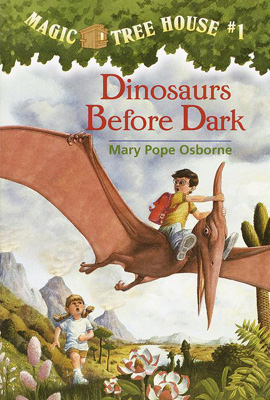 This book inspired a plethora of equally outrageous adventures.
Advertisement:

Magic Tree House is a successful series of children's books written by Mary Pope Osborne that is currently running after the first installment of the series (pictured to the right) was published in 1992. There are over fifty books in the series so far, not counting the research guides that go along with them.

The books are about two kids from Frog Creek, Pennsylvania, siblings/kid heroes Jack and Annie. In the inaugural incarnation of the series, Morgan le Fay orders the kids to go on missions through time and all around the world to solve ancient riddles, save ancient stories, and become Master Librarians. This is possible through their tree house, which allows them to perform Time Travel (or travel inside books, it's not really made clear which).

That was for the first 28 of the books, and the next series was about Jack and Annie going on Merlin Missions (missions directed by Merlin the magician), traveling to places like Camelot. The books teach kids about history and the different cultures that Jack and Annie visit.

There's also a Japanese adaptation with manga illustrations. They all contain paper dolls of Jack and Annie with outfits corresponding to the stories. The first 28 volumes were published into 14 Japanese volumes, two stories to a book. After that, each book was published individually. There was also an anime movie by Ajia-Do based on the book series that was released in 2011.

As of August 2012, nonfiction companions called Magic Tree House Fact Tracker books have been written for 27 installments of the original series.