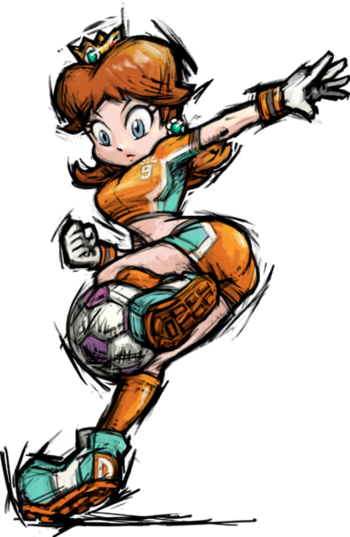 Daisy's contemporary vernacular, stronger-than-Peach strength, hair to match, and of course, not pink colors, are all indications that she is not the girly princess.
Advertisement:

A Princess who is a Tomboy, instead of, or perhaps in addition to, the more typical traits of a princess.

There are many reasons for this trope. A very unfortunate one is that Tomboys are depicted as "better" than Girly Girls. This might be because Most Writers Are Male, or because female writers project their issues with femininity on their writing, or because there's a need for role models, or because Real Women Don't Wear Dresses, but either way it seems to be a way of saying, "See, our Princess is a role model for modern girls! She's not girly like the stupid and shallow princesses from the past, she's better!" Expect there to be several girly traditional Princesses for contrast. Occasionally both the Tomboy and the Girly Princess might learn to appreciate each other in spite of their differences. In these types of uses, the Tomboy Princess is used to tell An Aesop about gender roles. This isn't necessarily a bad thing, as long as it doesn't overwhelm the character and story.

A more moderate approach is to use the "Tomboy Princess" as a way to combine Tomboy and Girly Girl and Tomboy with a Girly Streak into one character. Who says tomboys can't be girly? Who says girly girls can't be tomboys? This has the advantage of appealing to a lot of girls who both want to play with the boys, but also like wearing tiaras and fancy dresses (also showing that She Cleans Up Nicely). Maybe she considers a Pimped-Out Dress to be the princess version of the Ermine Cape Effect, and her style of everyday Modest Royalty happens to appear quite boyish (if only by comparison).

These Tomboy Princesses are usually too busy being awesome to bother with trying to teach Aesops. Although occasionally they'll have a Very Special Episode to teach one. The most common pitfall for a writer with this type of Tomboy Princess is having her become too awesome.

These are the most common forms of the Tomboy Princess, but there are other uses. For example, a Princess might be made a Tomboy so as to make her more down-to-earth than the rest of the nobles. In this case, the focus is more on class roles rather than gender roles.

Because she doesn't care as much about keeping up the a feminine and demure appearance, she might not be a Pretty Princess Powerhouse even if she's a fighter. There also may be some overlap with Rebellious Princess, depending on the character and the narrative.