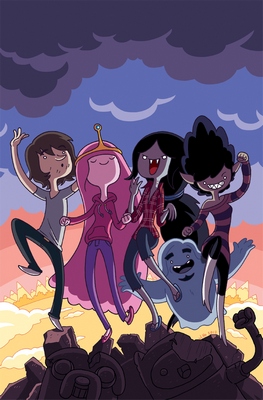 A six-issue spin-off to the Adventure Time comic book series, starring Marceline and Princess Bubblegum. It's written by Meredith Gran.

Marceline starts her own rock band, the titular Marceline and the Scream Queens, which includes bandmates Keila (a fellow vampire and lead guitarist), Bongo (a ghost and drummer), and Guy (a mysterious, rather human-looking individual and keyboardist), with Marcie being the lead singer, bassist and composer.

Bubblegum at first dismisses her band's music as "brainless mind goo". But upon seeing the band play in her music festival, PB changes her mind, seeing that the group does have a passion for it and is not just all about image as she first thought. However, Marcie isn't convinced the band is going to take their tour seriously and frets on how to keep them focused. PB offers to come with them to be their manager and help them out, which Marceline accepts. PB puts Jake in charge as temporary king of the Candy Kingdom (bringing BMO along for some reason) before setting off with Marcie on her tour.

Marceline and the Scream Queens has the following tropes: