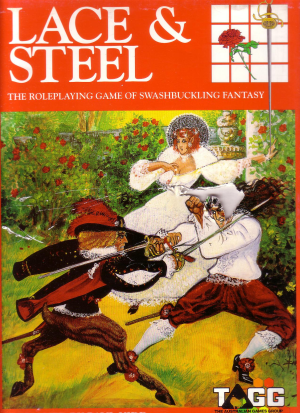 Original boxed set cover
Lace & Steel is an obscure 1989 Tabletop RPG by the Australian author Paul Kidd. Set in the original Constructed World of Mittelmarch inspired by 1640s Europe, the game is designed to recreate wild Swashbuckler adventures Kidd is best known for writing. He also penned the tie-in novel Mus of Kerbridge

set in the same world and the Castle Keitel intro adventure.
Advertisement:

The original game was released in a boxed set by The Australian Game Group, containing the rule books and a set of special combat and sorcery cards used to resolve conflicts both violent and social. The rules (but sadly, not the intro module) were reprinted as a single book in 1997 by Pharos Press. The game can be viewed as a thematic precursor to 7th Sea.