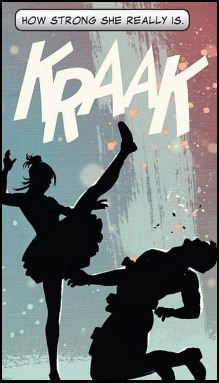 In most forms of fiction, Men Are Strong, Women Are Pretty, and this is so woven into the human consciousness that altering those points too much can alienate your target audiences. An overly-aggressive female character can seem less relatable to a feminine audience, although it's hard to have a likable character in an action show that doesn't do any fighting at all. You can hopscotch around this issue with Sword and Sorcerer, Male Might, Female Finesse or Guys Smash, Girls Shoot, but what do you do when martial arts or physical combat is the entire focus of the series?

You compromise with Dainty Combat. In this trope, a character (usually small and/or female) uses a more graceful, beautiful and possibly gentle fighting style in order to combat her opponents. Attacks typically focus on kicks, holds, Pressure Points, flourishes, joint locks, swift tosses and open-hand strikes (such as palm strikes or slaps) rather than heavy blows, grappling and wrestling. Rather than blocking, defense is focused on dodging, invoking acrobatics, gymnastics, and possibly dance moves to avoid taking a direct hit.

When Dainty Combat includes weapons, it's usually some form of Gun Kata, swordplay with flourish, or a whip.

Not all characters that use Dainty Combat are women and not all are small or frail, but they are by far the most common practitioners. It thus overlaps a lot with Waif-Fu, although in this case, the woman need not be a "waif" (small or smaller than her opponents). Waif-Fu is about the contrast between a small woman and her larger opposition; this trope is about the fighting style she uses to beat them.

This also typically overlaps with She-Fu, although acrobatics are a small component and need not be required.

Sub Tropes and characters likely to use this include: