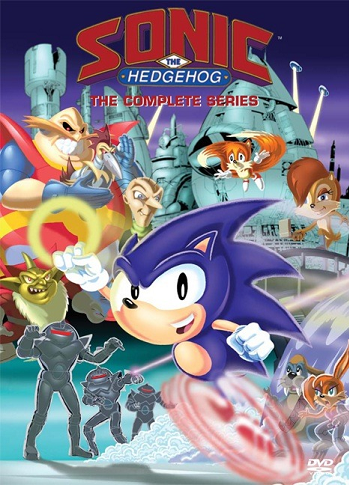 Sonic the Hedgehog is a cartoon adaptation of Sonic the Hedgehog produced by DiC Entertainment, and currently distributed by DHX Media. The cartoon is quite unique for airing simultaneously with another, entirely different cartoon based on the exact same character: Adventures of Sonic the Hedgehog. Being the more serious of the two, it is a very sharp contrast to its similarly named but much more comedic weekday counterpart. The show is commonly known as Sonic SatAM (as in Saturday Morning, when it aired on the American ABC network) to distinguish it from the other show, which was aired in syndication on weekdays. It premiered on September 18, 1993, replacing Goof Troop on the 9:00 AM time slot. It was bumped to the 8:30 AM time slot for season two, where it remained until it ended on December 3, 1994; reruns aired on ABC until June 3, 1995.

The series features Sonic as the leader and primary member of the Freedom Fighters, a closely-knit resistance force attempting to overthrow the dominion of Dr. Julian Robotnik, a genius dictator who has already conquered most of the planet Mobius and turned it into a cold, urban, metal nightmare. All of the conquered peoples are forced to undergo roboticization - a process that turns living creatures into automatons that serve his empire as forced laborers.The series fell victim to the demise of many Saturday Morning Cartoons, being abruptly cancelled after two seasons on a Cliffhanger, on a total of only 26 episodes. Even when it was originally aired on ABC, it was pre-empted in many markets: some viewers didn't see the show at all until it was re-aired on USA Network.

Sonic Spinball is based on some of the show's concepts. Sega had also planned to make a proper spinoff game of the show, but that was also cancelled.

Sonic the Hedgehog (Archie Comics) was licensed as a spin-off of this show, though the comic book got to the consumers first. Despite being officially licensed as a spinoff and using many of the same characters, the comic bears little similarity to the shows' overall plot.

was released in April of 2022, with the theme song covered by Johnny Gioeli of Crush 40. It is hoped a full-length pilot will be considered by SEGA and Wildbrain when completed.

In addition to the aforementioned Adventures, this show is not to be confused with Sonic Underground (of which writer Ben Hurst also wrote a few episodes), Sonic X, the Sonic animated film, Sonic Boom, or the 2020 movie of the same name.

open/close all folders
Tropes # to C
Tropes D to F
Tropes G to J
Tropes K to O
Tropes P to T
Tropes U to Z
"Let's do it to it."
Feedback