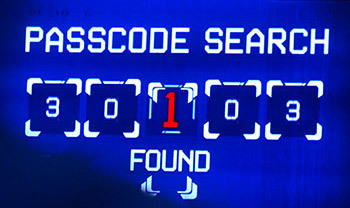 The way passwords get brute forced

tends to make very little sense. What you normally see in a movie or TV show is all the possible codes flashing on the screen, and then the computer locks in correct digits one at a time. It seems that computer password systems are similar to tumbler locks: You can pick it one at a time. But real passwords either work or don't. It's not a game of Mastermind.

Occasionally, the locked in digits aren't even starting at the first digit. No explanation on how a computer would know that this random choice for the seventh digit is correct, and no explanation about how it suddenly knows that 3 is correct when chances are it would have tried a 3 in that space dozens of times by now.

More ridiculous is when it cycles through dozens of numbers on the readout when it should, at most, only have to cycle through ten if each digit can be "locked in." If a password is n symbols long and there are m possibilities for each symbol, then the complexity of brute force is usually m^n, but the password slot machine reduces it to m×n.note This is similar to looking for a particular grain of sand in a small bottle (m×n), versus the same grain of sand on an entire beach (m^n). For example, a six-digit password of only numbers takes up to 10^6 = 1,000,000 tries to brute force, but if correct digits "lock in" then it takes at most 10×6 = 60 tries instead (the best strategy would be to cycle through an ordered string e.g. 12345, then 23451, 34512, etc., which would cut guesses down to m).

Often, the implication is that the computer is not actually guessing the code, but deriving it via reverse-engineering the system it's trying to crack. The constant cycling of numbers merely shows that the computer is performing the calculations. This would also explain why which digits it locks in where and at what time can vary so widely across different uses of this trope: every system is different, and since the computer most likely doesn't know exactly what to look for unless it's cracked the same system once before (which is rare), it looks through everything, and could come across any piece of the code at any time. Alternatively, even if it does know, it may sometimes need to look at a few different parts of the system and then use those pieces of information to determine a digit rather than simply coming across it ready and waiting.

Named for the way the digits spin and then get locked in, which is similar to the action of a slot machine.

This trope is a sort of Exact Progress Bar, and it's usually used in time-critical situations. The "locking in" is a handy device to show the audience how close the computer is to cracking the password. Essentially a visual representation of Safe Cracking as well as a technological progression of it.

In Real Life, a good password system will not reveal anything about an incorrect guess other than "that was wrong," will take the same amount of time to process any input, will be slow enough that you can't try thousands of passwords a second, and will respond to some number of consecutive wrong tries (usually three to five) by locking the account and alerting the sysadmins. However, many real systems fall short of this ideal; it's easy to make a design or implementation mistake. And a common mistake is to take slightly less time to process an incorrect password if an earlier character is wrong, which allows "locking in" early characters exactly as in this trope.

Subtrope of Hollywood Hacking. Contrast with One Password Attempt Ever.