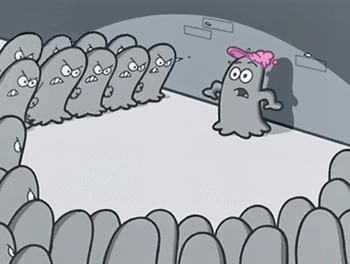 Stand out? Stand down.
In suspended animation my childhood passed me by
If I speak without emotion, you'll know the reason why
Now I'm to begin a life that I'm assigned
A life that's been lived before a thousand times
— The Who, "905"
Advertisement:

In any given society that works via a collective or Hive Mind, the introduction of individuality into a single member can have one of several consequences.

See also Assimilation Plot, where individuality isn't just illegal, it's physically impossible. See also The Evils of Free Will, where this is also illegal, or at least someone wishes it was, but not really a problem thanks to Mind Control and Mass Hypnosis. All of the Other Reindeer is also somewhat related to this trope, and also the "Aliens as Communists" section of Scary Dogmatic Aliens. If individuality is frowned upon instead of being illegal, see Loners Are Freaks. Compare Against the Grain, which is the act of going against expected roles.

See also Loss of Identity and Identity Breakdown, which are the likely consequences of this on former individuals.