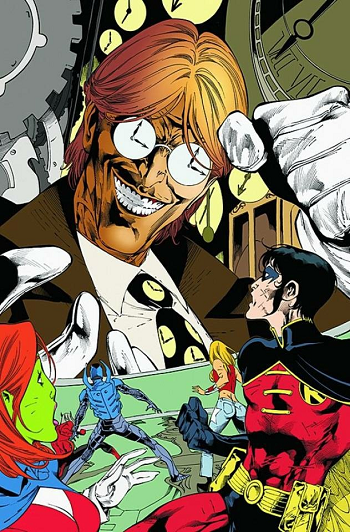 He'll crush his foes in a timely manner.
Gilbert Huph: You know, Bob, a company...
Bob Parr: Is like an enormous clock.
Gilbert Huph: ...is like an enormous cl- yes, precisely! It only works if all the little cogs mesh together! Now, a clock needs to be cleaned, well lubricated, and wound tight. The best clocks have jewel movements, cogs that fit, that cooperate by design. Heh, I'm being metaphorical, Bob. You know what I mean by cooperative cogs? ...Bob? Bob? LOOK AT ME WHEN I'M TALKING TO YOU, PARR!
— The Incredibles
Advertisement:

In fiction, clock motifs are often used to represent characters who are fanatics about order and control. These characters tend to be, more often than not, sinister Control Freaks, due to the view that Order Is Not Good. Just note that this trope isn't inherently evil, and it can occasionally be used for more harmlessly uptight characters, such as those with Super OCD. It may also symbolize a Time Master.

There are a few reasons for this symbolism. For one thing, clocks are known for having a rhythmic, consistent tick-tock sound. Alternatively, it may have to do with the passage of time itself, which is also unfailingly consistent. Clocks are often seen as the best objects to symbolize the concept of time. Also, clockworks are usually made of complex mechanism of gears and cogs that give them a sense of order.

May overlap with Clock King, a character who expertly uses clocks and timing to plan and control things. With this trope, it need not necessarily be time that the characters are obsessed with, just anything that involves keeping some sort of order. See also The Watchmaker, another trope about the complexity of clocks used to represent a characterizing trait.

Clockwork Creature may not necessarily feature this motif, but overlaps are definitely possible.