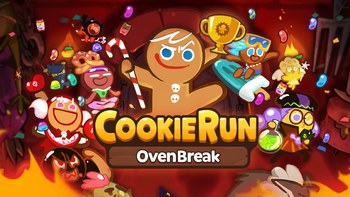 "Did someone say "Run"? Let's go!"
— GingerBrave note Known as Brave Cookie prior to OvenBreak.
Advertisement:

Cookie Run is a series of semi-freemium endless running sidescroller games for mobile platforms, created by the South Korean company Devsisters. In these games, players assume the role of various cute, sapient gingerbread-man-style Cookies who traverse various environments while collecting candies, coins, and power-ups- all of which are broadly referred to as Jellies- in order to achieve the highest possible scores. These Cookies are often accompanied by unique Pet companions, who assist their Cookie friends in various ways. Cookies may also equip items called Treasures, which provide their own unique bonus effects to aid in running and scoring.

The original game, OvenBreak, released on iOS in June 12, 2009. This game had two Cookies, no Pets, and no Treasures, but seven game modes. It was followed by OvenBreak 2 in 2012, which had only one game mode but added more Cookies and introduced Pets note called Charms at the time. It also introduced a leaderboard where players could compare their scores with friends; this Pv P play would become a staple of future games. The next games, released in 2014, were and are powered by various mobile chat services: Kakao in the game's native South Korea in 2013, and the international note save for China, which used QQ LINE in 2014. These games were all referred to as Cookie Run, but outside of Korea, both are often called LINE Cookie Run for simplicity's sake (sometimes abbreviated as LCR). This installment introduced a great many new characters, expansive lore, and the implementation of Treasures. In October 2016, they were succeeded by the game's current version, Cookie Run: OvenBreak (often abbreviated as CROB), which continues to introduce more new Cookies and invests even more into PvP race gameplay.note LINE version stopped updating around the time CROB was released, and the game officially shut down on June 5th, 2018. However, the Kakao version of the game can still be played, although it no longer updates either.

There are also three non-runner spinoff games: Cookie Wars (a Tower Defense game)note which was unfortunately discontinued because of getting stuck in Update Hell and Cookie Run: Puzzle Worldnote known in its beta as Jelly Pop! and also previously known as Hello! Brave Cookies! (a Match-Three Game). Another game, Cookie Run Kingdom, was announced around the same time as Puzzle World, and released on January 21, 2021 as a part village simulator and part tactical RPG.

While it has earned itself a rapidly growing, hugely diverse fanbase worldwide, Cookie Run is still most popular in its homeland South Korea, judging from their follower

, having its own different comic continuities, gorgeous fanart and cosplays, as well as its own merchandise store website (domain not available as of January 1, 2017)

. Not bad for a mobile game about super-speedy running confections!

Its cast is continually growing, so remember to put individual characterization tropes on this game's characters page instead of this page!

open/close all folders
Tropes Found in LINE and CROB