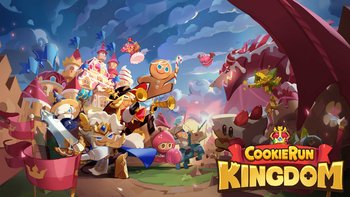 When running is not always an option...

Cookie Run: Kingdom (additionally known as Cookie Kingdom) is a non-runner spinoff of the Cookie Run series, released on January 20th, 2021 by the South Korean company Devsisters, after much promotion and fanfare, with over three million downloads preregistered. Not unlike its predecessor, players assume the role of various cute, sentient gingerbread-man-style Cookies, but this time is to build a kingdom for your own ruling, defend it from the Cake Monsters - those thanks to the Witch’s Life Powder also came to life, and unravel the story revolves around the great ancient kingdoms that once existed on this land. In another word, it’s a free-to-play RPG and city builder hybrid.