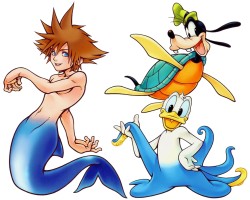 They actually use this trope as SCUBA gear.
Advertisement:

Usually when Our Mermaids Are Different, they still tend to be part fish, or more specifically the scaled kinds. It's less common to see a merfolk that's part shark note  though sharks technically have scales, they are, if not microscopic, at least really small or ray, or part cetacean, crustacean, cephalopod, mollusk, etc. But they do show up in fiction, and that's what this trope is about. Octopus-bodied merfolk, in particular, are the most likely to be treated as their own thing and are often called "caecilias".

Also these merfolk are still just as likely to have the Mermaid Problem, unless they are part aquatic mammal or part shark.