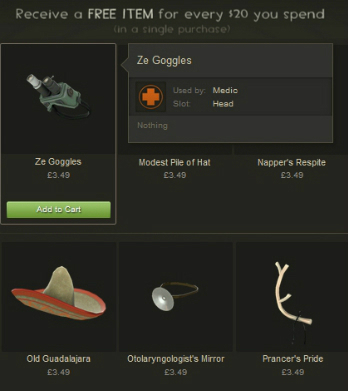 They, of course, do nothing.
But let me emphasize as hard as I can that this shit has gotten completely fucking mental! The in-game store of Ghost Recon Break-even is bigger than my local Whole Foods. Guns, upgrades, hats, trousers, emotes, icons... ICONS?? Who on this good green Earth has ever glanced at someone else's custom multiplayer icon for more than a fucking nanosecond and said "Ooh, here's someone I need to take seriously"? And let's not forget you can buy what's termed "Time Savers". So first we buy your game, Ubisoft, and then you charge us more money to not have to play it. If I paid double price up front, would you just not give it to me at all? Take a step back, people, because this has all gotten way too fucking normalized. When you charge money for something you can produce infinitely at zero cost, like in-game currency, that's not a service. That is the fucking death of economics as a concept. How the fuck did we get here from basic principles of trade? It's like walking up to a dude in the stocks in the village square and saying "if you give me 3 turnips I'll spit in your face."
—Zero Punctuation on Ghost Recon Breakpoint
Advertisement:

We would like to believe that game companies exist solely to provide us with fun, exciting games. Unfortunately, in the real world like any other company, game companies also have to make money.

It is for this reason that there so often seems to be design features in games, both computer games and board games, that seem solely designed to ensure increased profit for the manufacturer without technically, specifically, necessarily adding any gameplay value for the consumer.

Of course, most examples of this are controversial. For example, while many players may regret having to buy large quantities of booster packs in order to get the one card they want, others may consider the uncertainty of opening a booster pack just part of the excitement of the game.

This is particularly common in "Free" MMOs, which can be either truly free, with all content available to all players; or only partially free, with limited free content available, making them Allegedly Free Games. For the former, there are usually game-enhancing (possibly even game-breaking) equips and boosts, as well as a variety of cosmetic-only (usually fanservice-enhancing) items, available for real money in some form of in-game cash shop. Several studies have discovered that the presence of Revenue Enhancing Devices in "free" online games, even those that are strictly cosmetic, typically increase the amount of revenue generated per player by up to double that of subscription-only games.

During the late 2000s, Microtransactions became much more commonplace in video games, particularly in console and mobile games. With the ability to purchase non-physical goods becoming very convenient, companies and developers have created new ways to take more money from people than the game's price tag. One of the most popular methods of monetization are Loot Boxes, where players can open a mystery box that gives out a random assortment of items, while in many cases not providing a way to acquire a specific item directly. Video games that are focused around these mechanics as a means of progression are commonly referred to as Gacha Games, which are more prevalent in Asian markets. While players are still able to opt out of paying real money for these systems, they do not discourage players that are willing to spend hundreds of dollars to get what they want. In fact, these types of players, known as "whales", are the main source of income for these systems.

The term comes from the Reagan Administration, where Ronald Reagan had more-or-less promised smaller government, and found they had to raise taxes. Well, rather than say they were raising taxes, they mentioned a new way to obtain money: Revenue Enhancement, which people immediately saw that 'Revenue' in this case meant 'tax' and enhancement meant 'increase'.

Contrast Expansion Pack, where one man's Revenue Enhancement is another man's extra content. Compare Allegedly Free Game, Bribing Your Way to Victory, Freemium, Guide Dang It!, One Game for the Price of Two. May result in Crack Is Cheaper.