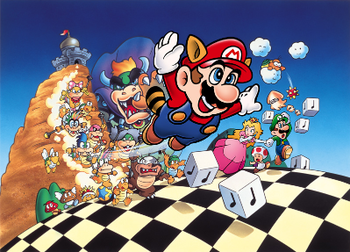 Oh, there's Bowser! And he brought the whole family this time!whisper Wait, what do you mean those aren't his actual kids?
"So I give you... SUPER! MARIO BROTHERS! THREE!!!"
— The Video Armageddon announcer, The Wizard
Advertisement:

Super Mario Bros. 3 is the fourth installment in the Super Mario Bros. series by Nintendo. Having saved the Mushroom Kingdom, the Mario Bros. must now liberate the surrounding kingdoms from Bowser, who, in the vein of Napoléon Bonaparte, has divvied those kingdoms up between his seven kids, the Koopalings. Mario and Luigi must first trounce the Koopalings, retrieve the Magic Wands stolen from the rightful rulers, and restore the kings to human form before they can finally tackle Bowser himself. A promotional video in 2015 had Miyamoto state that the game is a stage play.

The game was released on October 23, 1988 for the Famicom in Japan and on February 12, 1990 for the Nintendo Entertainment System in North America.

The final installment in the 8-bit series of Super Mario games, it introduced several new power-ups and features, in addition to a much larger selection of levels, enemies, and so forth; most notably, the Koopalings debuted here, and would go on to be recurring characters in the later series. Super Mario Bros. 3 was also the first Mario game to have a specific cartoon Spin-Off, in the form of The Adventures of Super Mario Bros. 3. It also received advance publicity in the U.S. from the movie The Wizard.

open/close all folders
#-D
E-H
Advertisement:
I-M
N-S
a hideout for green Piranha Plants underneath; these enemies pop out only when they're going to shoot fireballs at Mario or Luigi. A secret area beneath a pool of quicksand can be accessed in 8-2.
T-Y