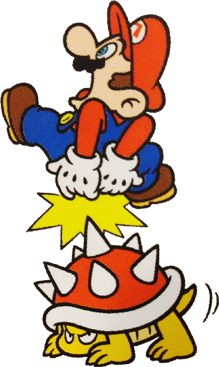 Where's a Goomba's Shoe when you need one?
"That's a Spiky Goomba. ...A spiky-headed Goomba. What a creative name. That spike is super-pointy, so it's better to hit it with a hammer than jump on it."
— Goombella, Paper Mario: The Thousand-Year Door
Advertisement:

The Spiny is a stock enemy type common in those platform games where enemies can be dispatched with the Goomba Stomp or sometimes some other form of close-range attack. Put simply, The Spiny, rather than taking damage from being stomped, damages you instead. After you've been trained to squish your foes, the Spiny forces you to rethink things.

A true Spiny will still be vulnerable to some alternate form of attack; otherwise, you've got an Invincible Minor Minion on your hands. The Spiny is usually covered in spikes, flame, arcing electricity, or something else obviously harmful to visually justify its ability to hurt you from below.

A variety includes semi-spinies which are vulnerable to only some parts of the body or who periodically retract their spines (or whatever hazard they have attached to them), allowing the player to counterattack with good enough timing.

The Spiny is a mobile form of Spikes of Doom and can be a Studded Shell. Related to Kung Fu-Proof Mook. Beware of the ones that are also Spike Shooters.

The spike on Sumo Bro's heads prevent Mario from jumping on them without getting hurt, even with Legendary Boots.

The spike on Sumo Bro's heads prevent Mario from jumping on them without getting hurt, even with Legendary Boots.