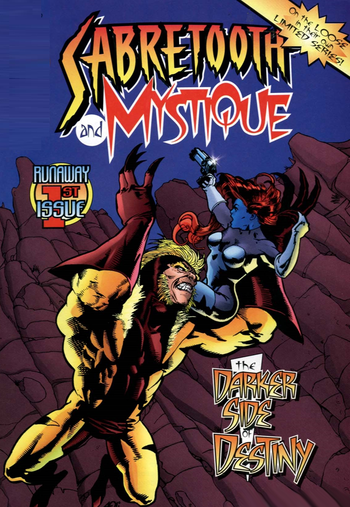 "You'll get your answers soon enough, Creed. I promise it'll be worth the wait."
—Mystique
Advertisement:

A four-issue mini series published in 1996, starring the two title characters, Sabretooth and Mystique, a pair of the X-Men's most frequent villains. The series was written by Jorge Gonzales with inks by Pier Brito, colors by Kevin Somers and finally Ariel Olivetti doubling on pencils and covert art.

The series is a side-story that takes place during Mystique and Sabretooth's time on X-Factor during the 1995 run of the series, written by Howard Mackie.

Mystique embarks on a mission of her own outside of X-Factor to deal with an old enemy. Given Sabretooth's connection to the same enemy, she frees him from his cell to accompany her on the mission, feeling he can be useful in helping her achieve her revenge. However, Creed also wants revenge on the man, so it's a free-for-all on who gets to him first as the villainous duo try to cooperate long enough to see their goal is completed before they kill one another.