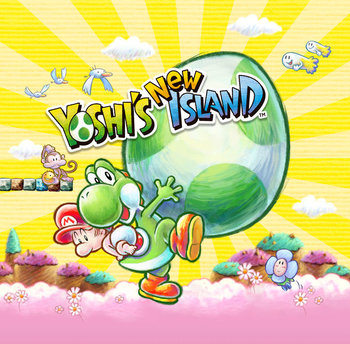 Yoshi's New Island is a sequel, or rather interquel to Yoshi's Island DS for the Nintendo 3DS developed by Arzest, made of former employees who developed DS, and part of the Yoshi's Island series.

Taking place between the original Super Mario World 2: Yoshi's Island and DS, it turns out that the parents to which Mario and Luigi were delivered at the end of the former were not their actual parents. Surprised by the mistake, the Stork takes off to find the brothers' real parents, but gets attacked by Kamek once again, resulting in Luigi getting captured and Mario getting dropped, again. This time, Mario lands in the Yoshi's other home, Egg Island and the heroic Yoshis go off to reunite the to brothers and defeat Baby Bowser, who wants to turn Egg Island into his own personal resort.

New Island largely does away with the changes to gameplay introduced by Island DS, instead presenting itself as a more direct successor to the original Yoshi's Island. The art style itself is a mix of the original game's main art style with the claymation-style pre-rendered sprites from its intro.