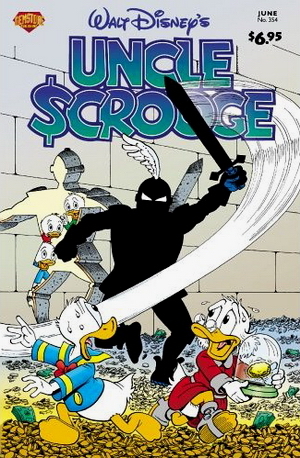 The Black Knight is a Disney comic written and drawn by Don Rosa.

Duckburg is visited by Arpin Lusène, a distinguished French gentleman who is unofficially known to be Le Chevalier Noir, a notorious master thief. As his final theft before retirement, he vows to steal Scrooge McDuck's fortune as the crowning achievement of his career. After a successful heist in the Money Bin that apparently yields little of value, Lusène accidentally comes in the possession of the dangerous Universal Solvent, a substance invented by Gyro Gearloose capable of destroying anything it touches (except diamond). Together with a stolen suit of armor and a bag of diamond dust, Lusène uses the Solvent to become an unstoppable Black Knight.

In The Black Knight GLORPS Again!, Lusène returns to retrieve his black suit of armor and correct the mistakes he made last time, but Scrooge himself has some new tricks up his sleeve as well.